You have reached a page dedicated to a specific and tragic MUNI accident, please visit our main MUNI Accident Page.

A bicyclist was killed this past weekend after a collision with a San Francisco MUNI bus on October 11, 2015. The bicyclist, a 48-year-old Bay Area resident, was traveling westbound on the 500 block of Market Street alongside a MUNI bus when he lost control and ended up wedged beneath the tires of the bus. He died at the scene. The cause of the collision is still under investigation and there has not been a determination of fault made. Ironically, this accident occurred less than two blocks from the newly-implemented, automobile-free zone of Market, which prohibits private autos with the goal of making Market safer for bicyclists and pedestrians. 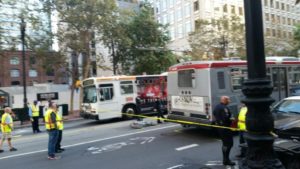 According to The San Francisco Municipal Transportation Agency there are more than 3,000 injury accidents each year, with roughly 1% of those being fatal.

If you have been injured by MUNI it is important to seek legal representation as soon as possible with a San Francisco Personal Injury Lawyer. Like all injury claims involving government agencies in California, a claim must be made within six months of the injury or else you may lose your right to recover or bring a legal action. Additionally, when dealing with governmental agencies it is imperative that you have experienced and knowledgeable lawyers who have dealt with claims against the City and County of San Francisco (CCSF) in order to ensure a maximum recovery.

The Law Offices of Matthew J. Quinlan, has experience fighting against the City and County of San Francisco. Our most recent case against the City and County of San Francisco (2015) involved a bicyclist who suffered severe injuries to his knee after a truck being driven by a CCSF employee allegedly ran a stop sign in the Sunset District en route to a MUNI delay that the employee intended to alleviate. Our client came to us after his claim was denied by CCSF. We sued CCSF and through discovery we were able to locate and obtain GPS data that was being transmitted from the CCSF truck. Our experts analyzed this data, which tended to show that the truck did not stop at the stop sign as the CCSF employee testified in deposition, but rather only after striking our client. Immediately after we received a settlement of $300,000, which included compensation for: pain and suffering, wage loss, and medical expenses.

If you have been injured by San Francisco Bay Area MUNI, BART, AC Transit, VTA, or SamTrans, schedule a free consultation with one of our experienced San Francisco Muni Accident Lawyers attorneys by calling us at 415-345-4282.

Ari B.
★★★★★
Dan did a very good job of putting me first and did whatever he could to make sure I was happy with the result. The communication was outstanding and I felt like I knew exactly what was going on the entire time. This case was resolved efficiently & quickly & I am very pleased with the outcome. Thank you guys so much! If I ever get in another accident like this (which I hope not) they will be the first people I call.
Read more reviews →
Do I have a case?
Find out for free!
*We will never share your information