Admittedly, I do text and drive every so often. I have sent texts that range in urgency, from “You’ll never guess what song is playing,” to “He passed away today.” But danger does not discriminate based on the content of my texts, and each message typed–whether silly or urgent in nature–presents the same risk of hurting someone else or myself. And I realize that–even as I am typing out the messages with my right thumb, moving my eyes from screen to road, screen to road. I knew it when I responded to a text from my friend Annie, telling her I was running late because of traffic caused by an accident and agreeing to pick up sugar from a market on my way to her house. That was the last time I texted while driving, and in retrospect, I find it entirely ironic that I was texting while driving about an accident that could have, itself, been caused by texting while driving. 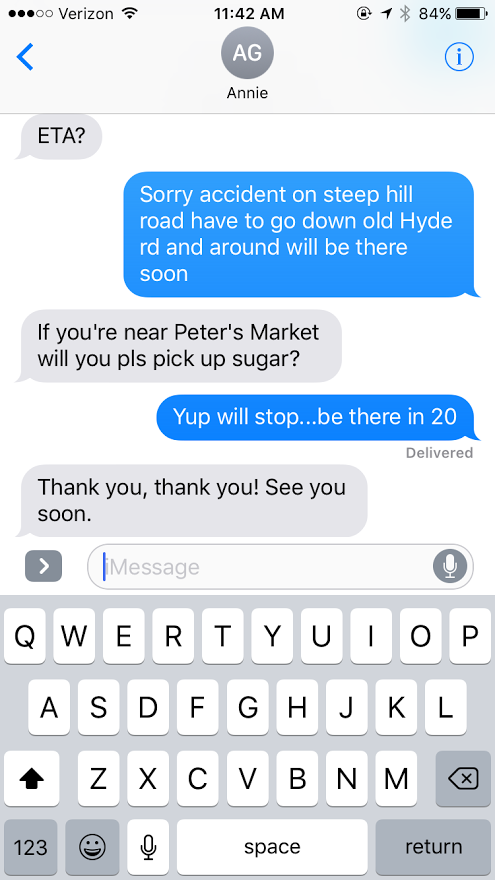 My conversation with Annie was of such little importance given how much damage it could have caused. Like I said before, I knew this was the case at the time. But young adults, myself included, oftentimes have an invincibility complex, an it-will-never-happen-to-me mindset. I fell into that trap and texted Annie back. I was in slow-moving traffic, after all. In a way, it was helpful in that I was able to do her a favor by stopping to pick up sugar on my way over. My text inspired her to ask for a favor that saved her a trip to the market. So it was helpful, right? That logic and justification work only when no one gets hurt, when no one’s heart has to race because they see an oncoming car swerving into the wrong lane. If I had not texted Annie, I would not have known to stop for sugar. And it would have been okay. But in the moment I allowed myself to text her, not because I felt the urge to take a risk, but because I did not see the risk at all.

Texting while driving has become so normalized that I tend to forget the risk I am posing by doing it. And perhaps that is exactly why it is so hard to stop texting and driving: I have never faced the consequences (not in the form of causing or being victim to an accident, nor in being pulled over by the police), and that makes it hard for me to imagine the potential danger I could cause by texting while driving. This thought process is silly and I know it. There are more than enough examples in the news and among my friend groups and family to show the dangers of texting while driving.

Of course I can stop texting and driving. I can put my phone into the glove compartment every time I start the car. I can turn it on airplane mode when I buckle my seat belt. Will I? I may try these tactics out, but I most likely will not do these things every time I get in the driver’s seat. But I will pledge to at least put my phone face down, somewhere slightly out of reach, and refrain from looking at it while my eyes should be on the road.

Nidia S.
★★★★★
“Matt and Dan were very attentive and always available to answer any questions or doubts I had. I felt comfortable that my case was in good hands. Ultimately, I am happy with the work that was done.”
Read more reviews →
Do I have a case?
Find out for free!
*We will never share your information